Henderson, Nev. More than 2,500 visitors joined in the festivities Oct. 13 for the inaugural Henderson Festival of Cultures hosted by the City of Henderson’s Department of Cultural Arts & Tourism and Nevada State College.
The fair, which took place at the Henderson Events Plaza located at 200 S. Water Street in the Water Street District in Downtown Henderson represented cultures from around the world, including those from countries such as Mexico, Morocco, Thailand, Peru and Ukraine, and featured a variety of cultural experiences, including live performances by musicians and dancers; exhibits and booths; and world cuisine presented by area restaurants and food vendors.
Originally known as the Nevada State College Scorpion Heritage Festival, a college-wide celebration of cultures, this is the event’s first year as a community-wide festival.
The turnout from Saturday’s event shows us that the community continues to both want and need cultural events such as this one, and we are looking forward to turning it into an anticipated annual event, said Dr. Rene Cantu, Vice-President of Multicultural Affairs at Nevada State College.
The fair also included a Beers of the World Garden sponsored by Lee’s Discount Liquor. Proceeds from the beer garden were donated to Lee’s Helping Hands, which funds several local charities, and the Nevada State College Heritage Center, which offers students, faculty and staff with opportunities to participate in programs and activities that celebrate the Henderson community’s diversity.
A contest to design next year’s Henderson Festival of Cultures poster was also part of the contest and was won by students Madison Dell, Abigail Cintron, Genevieve Vargas and Justice Dixey.
Nevada State College opened its doors to students in September 2002 after the Nevada Board of Regents and Nevada State Legislature determined the need for enhanced educational opportunities in Southern Nevada in 1997. The college currently enrolls 2,200 students.
Nevada State College provides progressive bachelors programs in several in-demand fields of study. Nevada State College offers a low student-to-professor ratio and competitive tuition rates.
For more information about Heritage Center events at Nevada State College, call 702-990-2142 or visit nsc.edu.
The Department of Cultural Arts and Tourism is dedicated to create and promote innovative and vibrant events that celebrate diverse cultural arts, involve and enrich the community and enhance tourism. The Department of Cultural Arts & Tourism provides a broad range of cultural and artistic opportunities for our community through the sponsorship of concerts, performances, visual arts exhibits, festivals and civic events at various locations throughout the city of Henderson.
The Henderson Pavilion, Henderson Convention Center, Henderson Amphitheatre and Henderson Events Plaza are all managed by the Department of Cultural Arts and Tourism.
For additional information on our programs and entertainment, please call: 702.267.2171. Office hours: are Monday-Thursday from 7:30 a.m. to 5:30 p.m.
For more information on Nevada State College, call: 702.992.2000 or visit: www.nsc.edu.

Since opening in 2002, Nevada State College has aimed to extend educational and cultural opportunities beyond its campus by combining efforts with other organizations. According to Dr. Rene Cantu, Vice President of Multicultural Affairs, there has always been an emphasis on collaboration as a way of highlighting NSC as a campus that is open to the community. In fact, during Nevada State College’s recent site visit from a team representing the Northwest Commission on Colleges and Universities (NWCCU), the College received particular commendation for its successful community partnerships with other educational and cultural institutions.
Academically, NSC partners with CSN, Truckee Meadows Community College in Reno and Western Nevada College in Carson City to offer seamless opportunities for students to earn bachelor degrees. There are also partnership programs with two universities in Mexico, Ibero-American University and CETYS University.
With events like the Talent Discovery Program, encouraging students to go on to college, the Clark County School District is one of Nevada State

College’s most frequent partners, especially in the District’s east region.
Culturally, the NSC Heritage Center is collaborating regularly with the College of Southern Nevada (CSN) and UNLV to plan and promote events to celebrate diversity, such as lectures, presentations and art exhibits. This includes inviting guest speakers from community agencies to give presentations on current and issues as part of events series like Hispanic Heritage Month and Women’s History Month. Already this semester there have been events involving experts and performers from Nevada, California and Florida.
This fall has also seen the debut of the NSC SOFA Series, a calendar of arts and culture events which brings artists and musicians from the community to interact with audiences in the Great Hall at the Dawson building.

In addition to all of these exciting community partnerships, the relationship that Nevada State College has developed with the City of Henderson was specifically highlighted by the visiting team from NWCCU. With the Basic and Water campus just down the street from the Henderson Convention Center and Events Plaza, NSC has been able see its connection with the city grow through public events. For example, just recently the School of Nursing and the Heritage Center sponsored an event at the Henderson Convention Center on the topic of Transcultural Nursing. The event included a Healing Presence ceremony and a presentation by renowned Nursing theorist Dr. Marilyn Ray.
An especially fun event has garnered a lot of attention recently. On October 13, over 2500 people and 40 community participants gathered at the Henderson Events Plaza for the inaugural Henderson Festival of Cultures. The all-day event, co-sponsored by Nevada State College and the City of Henderson’s Department of Cultural Arts and Tourism, celebrated the heritage of the population of Henderson through the art, music, dance and food of the many countries where we come from.
In 2005 and 2006, Nevada State College hosted the Scorpion Heritage Festival. But after last year’s event, Dr. Rene Cantu had the idea to expand the

festival to include the entire city. He contacted Sally Ahlstedt, program coordinator with the Henderson Department of Cultural Arts and Tourism, and together they built a committee and pooled resources. The result brought the community together with an event that surpassed what either group could have done on its own.
When scheduling the entertainment, Dr. Cantu said the committee looked for an authentic expression of Henderson’s culture that showcased local talent and local groups. The result was an array of exhibits and performances from over 40 groups 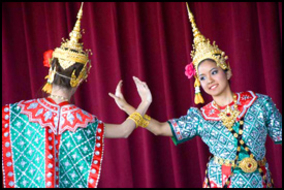 representing cultures from around the world, including Mexico, Ireland, Hawaii, Peru, Thailand, Egypt, Ukraine, Spain and Japan.
Attendees were treated to a wide range of traditional dance, music and even demonstrations of traditional arts, like Navajo weaving and Farsi calligraphy. There was also a special crafts area where children and families could learn to make Japanese origami, Hawaiian leis and Mexican paper flowers.
Lee’s Discount Liquor hosted a Beers of the World Garden, the proceeds from which were donated to Lee’s 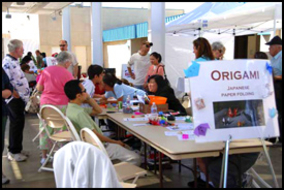 Helping Hands, which funds several local charities, and the Nevada State College Heritage Center, to further support programs and events that promote heritage and diversity.
The success of the 2007 Henderson Festival of Cultures illustrates how partnering can be the basis of positive growth and communication in any community. It is also representative of the growing partnership 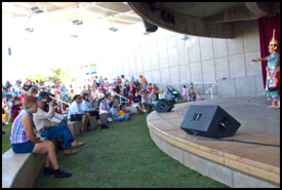 between Nevada State College and the City of Henderson. Dr. Cantu says he is looking forward to continuing this as a tradition and making it even bigger next year. It is likely that the Henderson Festival of Cultures will evolve into an annual event that everyone can look forward to.
For more information on Nevada State College, call: 702.992.2000 or visit: nsc.edu.

by Rebecca Zisch
From October 3 5, Nevada State College hosted a site visit from a team representing the Northwest Commission on Colleges and Universities

(NWCCU). The purpose of the visit was to follow up on NSC’s candidacy for accreditation and view first-hand how the college is progressing as a swiftly and steadily growing institution of higher learning. It consisted of two days of meetings, forums and assessment and culminated with an open meeting for faculty and staff.
According to the US Department of Education, [t]he goal of accreditation is to ensure that education provided by institutions of higher education meets acceptable levels of quality. In Nevada, colleges fall under the jurisdiction of the NWCCU and Nevada State College has been working with them as its accrediting agency since 2006.
NWCCU administers the regional accreditation process for 160 different institutions of higher learning and reviews the quality and effectiveness of those institutions through accreditation criteria and evaluation procedures that are recognized by the U.S. Department of Education and the Council Higher Education Accreditation (CHEA).
On October 5, the NWCCU visiting team’s findings were presented in an open meeting for faculty and staff. The presentation included some recommendations for improvement, as well as some official commendations of successes at Nevada State College. 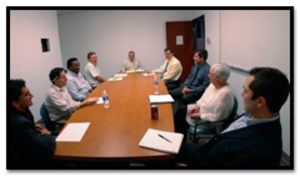 According to Nevada State College President Fred Maryanski, the team’s findings exceeded our expectations and there were no surprises in their recommendations. It was a very accurate assessment of NSC and we’re pleased that they had so many commendations.
The NWCCU team’s commendations were for four diverse areas of the college where there has been success and significant improvement in the 18 months since the previous site visit.
First, there was commendation for the growth and evolution of the Student Experience division and its excellence in customer service.
Second, the academic schools were praised for excellence in teaching and positive teacher-student interaction.
Third, NSC was commended for its successful partnerships with other institutions in the Nevada System of Higher Education and the city of Henderson. This commendation included noting the college’s master plan and its inclusion of combined private and public space.
Finally, the team from NWCCU applauded the overall enthusiasm and spirit of the whole Nevada State College community: from the students,

faculty and staff, to the Chancellor and Board of Regents.
The process for accreditation is lengthy, challenging and rewarding. Since submitting the first college-wide self-study for evaluation in February 2006, NSC’s faculty and staff have been working uninterrupted on the steps toward accreditation. April 2006 saw the first visiting evaluation team from NWCCU. Following that, on July 12, 2006, NSC’s candidacy for accreditation was officially approved by the Commission.
For the year following the approval of NSC’s accreditation candidacy, faculty and staff worked diligently on preparing the current self-study, or Interim Candidacy Report, to present to NWCCU. The demanding process of collecting data, writing and publishing the 280-page document was led by the Self Study Steering Committee co-chairs, Connie Carpenter, Dean of the School of Nursing and Rho Hudson, the Assessment and Evaluation Coordinator in the School of Education. 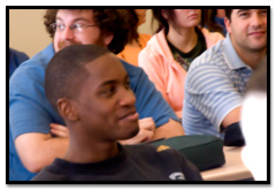 The results of this month’s site visit will be officially presented at a January meeting of the NWCCU. Following that, Nevada State College will undertake the next institutional self-study, focusing on development, improvement and successes. The self-study will be completed and submitted to NWCCU in preparation for the next site visit which will likely occur in April 2009.
The current Institutional Self-Study document may be viewed online in .pdf format
For more information on Nevada State College, call: 702.992.2000 or visit nsc.edu.