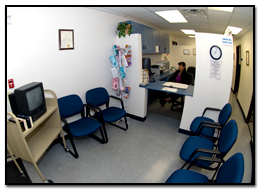 Nevada State College’s School of Nursing and Basic High School have teamed to provide the award-winning School Based Health Center (SBHC) and its much-needed services to local young people attending area schools. Its successes were recently honored with the Outstanding Partner award at the 9th Annual Economic Development Awards from the Henderson Development Association.
According to Yvonne Chaves, the school nurse at Basic High School, it was a natural partnership between [Basic H.S.] and Nevada State College with Basic’s health and wellness program. An academy within the school, the Institute of Health, Wellness and Medical Technologies enhances studies in the physical sciences, physical and health education for students who are interested in careers in the health sciences.
The SBHC is run by Director Donna Hines, a Registered Nurse, receptionist Marie Arroyo and three rotating Nurse Practitioners all of whom are employed by Nevada State College. In addition to these hard-working NSC employees who staff the SBHC, Basic High School students can also work as interns in the clinic.
According to Principal Susan Segal, any of our students who work in [the SBHC] gain invaluable experience learning about future career interests and working alongside dedicated professionals.
Segal adds, Without NSC, we would not have the success we’ve had. The fact that we have the staffing assistance from NSC is paramount to our success. The success of the SBHC includes recognition through grant money and community partnerships. Since its inception, besides NSC, they have found partners in the Clark County School District, Southern Nevada Health District, St. Rose Hospitals. Support has come from organizations like the City of Henderson Redevelopment Agency, the Henderson Community Foundation and the Trust Fund for Public Health.
The SBHC at Basic High School is open five days each week during school hours and provides direct health care 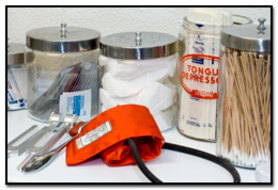 to any CCSD students from 4 18 years old. Most of the patients come from Basic High School and its surrounding elementary and middle schools and some of the most common reasons for visits are vaccinations, allergies and flu and simple injuries. All services are free, except for school physicals required for sports participation which cost a nominal $20.
Even vaccinations are free, thanks to the Vaccines for Children (VFC) program, a federally funded program that provides vaccines at no cost to children under 19 who might not otherwise be vaccinated because of inability to pay. One of the vaccines commonly provided is flu shots and the SBHC has even arranged Shot Clinics onsite at area elementary schools. This is the kind of service they would like to be able to provide more often. They are also aiming towards being open more days and hours. But everything is dependent on having the necessary funds.
Principal Segal held the first meeting to begin planning the SBHC back in January 2003.
It wasn’t easy getting the clinic off the ground, but she says, we persevered because the need was there, and we knew it could be a success for the school and the community.
One supportive community member who helped make the SBHC a reality is Dr. Joel Bower. A retired OB/GYN, all of Dr. Bower’s children had graduated from Basic High School. So, when he heard of the proposal for the SBHC through his work at St. Rose, he was thrilled to help and eventually, in April 2004, accepted the position of the SBHC’s Medical Director.
Between 2004 and 2006, the SBHC shared an office with school nurse Chaves. She has been at Basic for 16 years and she knows the affect that illness, even seemingly simple things, can have on a student’s ability to succeed at school.
According to Chaves, the advantage of the SBHC is they can actively treat so we keep the kids in school, reduce absenteeism and ideally increase GPAs. At Basic, students come through the school nurse’s office to get a referral to the SBHC. Chaves reports that Mondays are her busiest days because students that were sick over the weekend know that they can see the APN or Nurse Practitioner for free at the SBHC. This is an invaluable opportunity for students whose families don’t have health care.
Through grant money and supportive community members the clinic’s own building opened in Fall 2006 and the dedication ceremony was held on March 20, 2007. Segal says, it was an event of validation of our efforts. Everyone worked together to make it succeed.
Today, the SBHC which was named for Dr. Bower and his wife Carol is found inside a double-wide trailer on the Basic High School campus. At first this may seem unusual, but the staff is quick to point out that their quarters are the same size, if not bigger, than any other physician’s office. The SBHC has two exam rooms, a vaccine room, a waiting room, a storage room, two offices and a reception area.
In 2007 alone, the center was open over 150 days and saw over 1200 patients. Director Donna Hines has observed that the students don’t even really want to go to a primary care physician because they get better and more personal care here at the [SBHC].
Principal Segal agrees recalling a recent story of a young man whose family was given the run-around in traditional medical channels. It turned out that he had a brain tumor, but according to Segal, it was only because of the SBHC that he was able to get the referrals he needed to have the tumor correctly diagnosed. He was able to have successful surgery, come back to school and graduated on time last June.
Dramatic stories like this one highlight the successes of the center. But even small diagnoses can be life-altering for young people who haven’t had regular medical care due to it being cost prohibitive.
Hines says that a major benefit of the SBHC is that it is an avenue for catching kids that may have undiagnosed chronic diseases we can also keep an eye on kids who are living with asthma and other conditions sometimes they’re relying on the clinic because of the expense or inconvenience of going to a physician’s office Without the SBHC young people in these situations may go untreated and suffer unnecessarily for conditions that are relatively simple and could be easily maintained. This also causes much absenteeism. 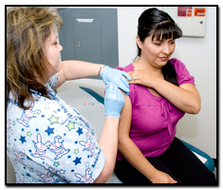 Gail Rattigan a faculty member in the NSC School of Nursing and Nurse Practitioner at the SBHC says that she takes the opportunity to speak to students who come in the clinic about their overall health, not just the symptoms they may be experiencing that day. She’s observed that just mentioning simple nutritional facts makes a huge difference in their health and their weight.
Rattigan adds, [the clinic] would like to be able to teach classes or seminars on keeping kids healthy. But due to time constraints and financial limitations, the SBHC staff is often unable to offer much preventative health care and they find themselves reacting to patients’ circumstances and symptoms as they develop. They say this is true state-wide due and addressing the nursing shortage is part of the mission of the NSC School of Nursing.
Segal notes that the staff of the SBHC has a tremendous amount of dedication to do whatever they can for the students. She listed raising money, working extra hours, going to community meetings and just getting the word out, as some of the ways they go above and beyond their job descriptions. And she adds, all of their involvement through the partnership with NSC will only continue to be increasingly beneficial to the community.
To contact the Dr. Joel and Carol Bower School Based Health Center at Basic High School, call (702) 799-0508.
For more information on Nevada State College, call : 702.990.2000 or visit : nsc.edu.