There has been a lot said about climate change, and the long-term effects it may have on our planet. There are indications that climate change may impact Nevada more severely and sooner than it will affect other less arid environments.
A climate change, interdisciplinary “dream team” of researchers from the Desert Research Institute; University of Nevada, Las Vegas; University of Nevada, Reno; and Nevada State College will spend the next five years detecting, analyzing and modeling the effects of regional climate change on our landscapes, ecosystems and water resources, and communicating the research results to policymakers and the public. The team will lay the groundwork to provide science, education and outreach infrastructure for the study of climate change and its effects on Nevada for years to come.
Nevada’s National Science Foundation Experimental Program to Stimulate Competitive Research (EPSCoR) led the grant effort, and the National Science Foundation’s EPSCoR is providing $15 million for the project to the Nevada System of Higher Education, including the Desert Research Institute; University of Nevada, Reno; University of Nevada, Las Vegas; and Nevada State College. The Nevada System of Higher Education is also providing nearly $6.6 million to the project from non-federal sources.
“This award allows the continued commitment that the Nevada System of Higher Education EPSCoR has provided for more than 15 years to academic research infrastructure and education,” says William Schulze, director of the Nevada EPSCoR Office & NSHE Sponsored Programs Office. “This long-term collaborative partnership between the NSHE institutions will expand the academic research and development enterprise and improve student education in science and technology.”
To broaden and increase the impact of the information, Nevada has formed a tri-state collaboration with New Mexico and Idaho, who are gathering similar information. And, the educational component will reach students at multiple levels, including K-12, undergraduate and graduate students.
According to Gayle Dana, associate research professor of hydrologic sciences at the Desert Research Institute and the project’s director, impacts from climate change are typically evaluated by downscaling Global Climate Models. However, this data does not sufficiently represent the complex terrain of the western United States.
“In other words, it does not take into account Nevada’s diverse topography and climate zones that occur within relatively short distances – ranging from the dry desert areas to the snowy mountain ranges. These diverse environments can hardly be lumped together to predict and prepare for future climate change in our state,” says Dana.
The climate change project includes six main components:
Climate modeling: Gather and use data to evaluate the effects of different future climate change scenarios and adaptation strategies.
Ecological change: Collect and analyze data on how these climate changes may affect our ecosystems, such as increasing the wildfire threat, encouraging invasive species, or increasing some plant diseases or pests.
Water resources: Collect and analyze data to better quantify and model changes in water balance and supply under different climate change scenarios.
Policy, decision-making and outreach: Provide information to and engage policymakers and the public to increase their understanding of climate change and help them make decisions to decrease its negative impacts on our society.
Cyberinfrastructure: Develop a data portal and software framework that will support effective interdisciplinary climate change research.
Education: Provide educational opportunities for K-12, undergraduate and graduate students, including the development of a climate change minor for students at the University of Nevada, Reno and University of Nevada, Las Vegas. Fund undergraduate, graduate and postdoctoral scholarships and fellowships.
Scott Mensing, chair and professor of geography at the University of Nevada, Reno and co-principal investigator of the project, points out that the Great Basin, which includes Nevada, is considered one of the most endangered ecoregions in the United States. This is due to numerous interacting factors including climate change, urbanization, changing land use, limited water resources, and other factors. Nevada is both the driest and the most urbanized state in the nation. The mean annual precipitation is only 10.98 inches, and 88 percent of its population lives in urban centers. And, while mountain areas comprise only about 10 percent of our landscape, they generate 85 percent of groundwater recharge and most surface runoff.
“It is essential to understand the effect that climate change may have on our environment and the state’s water resources. This project will increase our ability to plan for the future and better manage our resources to support the state’s environment, businesses and economy,” says Mensing.
The project has many facets and incorporates various forms of technology to produce results. For example, various instruments will be placed on two “transects,” or linear paths, to measure variables such as humidity, air temperature, wind speed, rainfall, solar radiation, snowfall, pollutants, snow depth, subsurface soil properties, surface runoff and more. One transect will be placed in southern Nevada, and the other will be placed in central or northern Nevada. The data will be collected and fed into a “data portal,” or high-tech Web site, that will be accessible to researchers in the state and worldwide.
A software framework will also be developed to integrate the various information so that it can produce meaningful data on climate change and its effects. According to Thomas Piechota, associate professor of civil and environmental engineering at the University of Nevada, Las Vegas and co-principal investigator of the project, this information will be put into visual and user-friendly formats that will be available at the “Solutions Room” at the University of Nevada, Las Vegas.
“This facility will use technology to make the climate change findings available to scientists, policymakers and the public in easy-to-understand and visual ways,” he says.
Find out more about the climate change project at www.nevada.edu/epscor/.

Science technology is ever evolving, similar to the growing Nevada State College campus community. With the Liberal Arts and Sciences Building, NSC has acquired cutting-edge science equipment which provides a superior student learning experience.
Particularly exciting are the new telescopes in the Liberal Arts and Sciences Building, offering progressive learning options to NSC students.
Students in Astronomy classes now have access to one 11 and two 16 diameter telescopes made by Celestron. Previously, NSC only had 8 telescopes. Having larger telescopes is significant, as the function of the telescope is to essentially collect light. The wider the diameter of the telescope, the more light you can collect, making it easier to observe the details of the deep sky objects. These telescopes are fully equipped with auto guides. By simply typing in the coordinates, the auto guide directs itself to what you are trying to locate.
NSC telescopes will get clearer views of the galaxies, given the LAS building’s location on its more than 500-acre master planned campus site, removed from the hustle and bustle of the Las Vegas Metropolitan area.
Dr. Sandip Thanki, Chair of Physical Sciences at NSC, believes this type of interactive learning not only provides students a taste of what astronomers would do in their research, but also makes the physical sciences more accessible.
Many students are not aware of how the sciences are so integrated into their everyday lives, Dr. Thanki said. What students are able to do now is more advanced in comparison to what was available a couple of years ago due to the ever-evolving technology, Thanki continued.
The new advanced telescopes also have Charge Coupled Device (CCD) cameras, which are similar to modern, personal digital cameras. Instead of just pointing out different objects in the sky, they take actual pictures of the galaxies, from which students can perform research and produce reports on their findings.
We are a young school and we have access to technology that can easily prepare us for our future careers. What more could a student ask for? comments Nevada State College junior Velanie Williams.
Williams has taken Astronomy 104 and is looking forward to taking the lab portion of the class next semester. I am extremely excited about the new 16-inch telescopes that we have acquired for the Astronomy classes. They will make learning about the stars so much more electrifying when you have the ability to see what you are studying so clearly, Williams said. Additionally, Williams has felt her perception of science has changed, based on her classroom experiences at NSC. My science classes have really broadened my learning horizons and given me a different outlook on my college career.
In addition to the new telescopes in the Liberal Arts and Sciences Building, there are various other advanced

technologies available to students and teachers. With the oscilloscope, students will be able to measure the speed of light and time varying electrical signals. Additionally, students can measure kinetic energies and energy losses in collisions with the ballistic pendulum, an instrument widely used in physics classes to demonstrate properties of momentum and energy. The spectrometer, an optical instrument used to measure properties of light, will provide opportunities to study light wavelengths and electronic configurations of atoms.
Providing a learning environment with enhanced technology not only puts the sciences within students reach, but also opens new pathways of lifelong learning.
For more information on Nevada State College, call : 702.990.2000 or visit : nsc.edu. 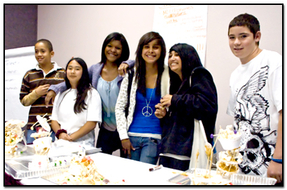 In early 2008, Nevada State College implemented Crossroads, a new program that teaches high-risk high school students the skills they need to become more engaged in school. Crossroads was initiated by Dr. Cantu and has become a success, as well as an adventure and learning experience for all involved.
The Crossroads program, designed specifically for high-risk seventh and eighth grade students in the southeast region of the Las Vegas Valley, re-engages students by having them see the value in their education. NSC’s faculty and students, plus the Clark County School District school counselors worked with the middle school students through playing activities and simulations. Crossroads teaches non-academic skills such as time and stress management and personal development skills such as motivation, resiliency, self-esteem and decision-making tactics.
On February 8, 2008, all students were given an entrance assessment, appropriately called, Revving Up, which consisted of 108 questions. When the program ended, an assessment titled, Moving On, was administered to students to document the progress made. The collected data indicated a large improvement in students resiliency ratings. The results concluded that 45% of participating at-risk students increased their confidence, 57% increased their perceived importance of education, and 55% increased their motivation.
Students who showed dramatic improvement in their confidence improved their ability to ask questions in class and participate in groups. Showing an increase in students perceived value in education enables them to better connect to short-term and long-term goals and envision future career opportunities as an outcome of success in secondary school. Finally, the area of motivation increased students’ belief that school is meaningful. Overall, this assessment shows that the identified students are engaging more in classroom and extracurricular activities and working toward demonstrating better school performance overall.
Crossroads is a program privately funded by Randy Garcia, founder and CEO of the Investment Counsel Company, an investment management consulting firm.
Dr. Cantu stated, I was happy to facilitate a link between Nevada State College and the community that aided the young people of Henderson, Nevada in their well-being and educational pursuits.
Crossroads will continue to help at-risk middle school students this fall 2008. For more information about Nevada State College, call 708-992-2000 or visit http://nsc.edu.
Katie Strittmatter
For more information on Nevada State College, call : 702.990.2000 or visit : nsc.edu.