A spirited crowd turned out for the commencement ceremony of Nevada State College’s6th graduating class on Saturday, May 9th 2009. The gathering, which took place at the Henderson Pavilion, was greeted by a mild breeze reminiscent of the winds of change as the 2009 graduates prepare to embark on their future endeavors. Standing proud in their cap and gowns, the graduates accepted their diplomas with pride from NSC President Fred Maryanski and Provost Leslie DiMare. 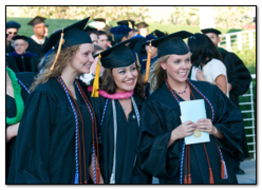 Nevada State College’s first commencement ceremony in 2004 saw 13 students graduate. The numbers have grown considerably, as the class of 2009 had 144 students. Family, friends, and faculty welcomed the graduates with applause, as they paraded into the Pavilion for their evening of pomp and circumstance.
All gathered were welcomed by President Maryanski, who introduced the distinguished guests that joined him on stage. Addressing the graduates, Dr. Maryanski stated, Nevada State College was created in the 21st century for the 21st century and for all people of the 21st century. It would be the challenge of the graduates to use their talents and abilities to strive for future success.
NSHE Board of Regents Chair Michael Wixom was among the dignitaries, offering words of inspiration to those gathered. As he acknowledged the challenges that lie ahead for the graduates, Wixom borrowed the words of J.R.R. Tolkien, All we have to decide is what to do with the time that is given us.
This year’s student speaker, John Nicpon, was an English major holding a 3.98 GPA at NSC. He shared
with the crowd how he when he came to the college in 2004 he was at a crossroads in his life. Nicpon shared that as he graduates, he is proud to say he has witnessed his fellow students at NSC, rise to the challenge of their instructors, while aspiring to greatness in the service of their families and peers.
Among the graduates who participated in the commencement ceremony, 63 students represented the School of Education, 50 students hailed from the School of Liberal Arts and Sciences and 31 students came from the School of Nursing.
Just days before the commencement ceremony on Thursday, May 7th, School of Nursing graduates took part in 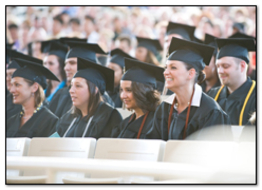 the traditional Pinning Ceremony at the Dragon Ridge Country Club. Each student ascended to the stage where they were pinned by one or more of their loved ones. The ceremony serves as a professional passing of the torch as well. A previous graduate of the Nevada State College School of Nursing program designed the pin presented to each graduate.
The recipients of this year’s President’s Medal, Hannah Brown and Randy Garcia, were celebrated at the commencement as well. This honor is bestowed upon individuals who have proven extraordinary commitment to Nevada State College’s mission. Brown was singled out for her service on the Nevada State College Diversity Council, providing advice to the college’s leadership on issues such as the creation of the NSC Promise scholarship program. Garcia was awarded the honor for helping to strengthen the financial underpinnings of the Nevada State College Foundation through his service on the Board of Trustees. 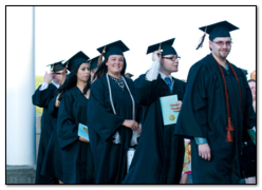 The evening’s final award was the prestigious Regents Scholar Award. Regent Kevin Page presented this honor to Jessica Kusak, who graduated Magna Cum Laude, with a Bachelor of Arts in Integrated Studies with a concentration in Communication and minors in Business and Psychology. The Regents Scholar Award is presented to one student from each Nevada System of Higher Education (NSHE) student exemplifying extraordinary commitment to academics and leadership service to his/her campus. The Regents Scholar award, funded by NSHE, totals $5,000.
Following the presentation of the awards, the attending graduates paraded on stage to receive their degrees amid a burst of applause and a host of camera flashes. The Nevada State College Brass led by Dr. Dick McGee accompanied the final procession of the NSC class of 2009.
After six years, NSC’s alumni base continues to grow with the addition of the 2009 graduating class, with the majority of them working and making contributions to the future of Southern Nevada
View more photos from commencement at our Online Photo Gallery above.
For more information on Nevada State College, call : 702.990.2000 or visit : nsc.edu.

The San Diego Zoo recently partnered with the US Fish and Wildlife Service to operate the Desert Tortoise Conservation Center right here in Las Vegas. Anyone interested in volunteering your time and making a big difference in the lives of a threatened species, then we have the position for you!
Come out to the Desert Tortoise Conservation Center to help us feed tortoises, wash totes, clean up the desert, care for sick and injured tortoises, and assist staff with data collection and data entry. Whatever your skills are, the staff can greatly use your help. If you have a few hours every week or only one day a month, the staff is willing to work around student schedules.
For additional information please contact Dr. Paula Kahn at pkahn@sandiegozoo.org.
You can also check out Dr. Kahn’s blogs at:
http://www.sandiegozoo.org/wordpress/default/desert-tortoise-team/#more-4247
http://www.sandiegozoo.org/wordpress/default/help-for-desert-tortoises/
For more information on Nevada State College, call : 702.990.2000 or visit : nsc.edu.