By Jess Kusak
The NSC School of Nursing will welcome The Commission on Collegiate Nursing Education (CCNE) accreditation team on November 16-18. In 2005, the School of Nursing received national accreditation from the CCNE, around the same time the school celebrated its first graduating class.
NSC will host this routine re-visit of the CCNE accreditation team, which is comprised of three experienced nurse educators. During the visit, the CCNE team will meet with nursing students, faculty, staff, and administrators at NSC. The nursing program in addition to the college’s resources that support the nursing students, such as the library and computer technology, will be evaluated.
We are proud that the nursing program has held national accreditation for the past 4 ½ years, said Dr. Coffman. This speaks to the quality of the curriculum, faculty, and teaching-learning practices, she continued.
The CCNE is an autonomous accrediting agency ensuring the quality and integrity of baccalaureate, graduate, and residency programs in nursing. It is officially recognized by the United States Secretary of Education as a national accrediting agency.
Over the past year, NSC nursing faculty has been conducting an internal self-study of the nursing program through evaluating and comparing the School of Nursing’s curriculum and practices to national nursing education standards. Assistant Professor Dr. Sherri Coffman has served as Chair of this self-study process, with Interim Dean Dr. Shirlee Snyder as co-chair, in which all nursing faculty have participated.
The School of Nursing’s accreditation has and will continue to benefit the growth and development of the program. For example, accreditation demonstrates the quality of the program to potential nursing students. Additionally, accreditation also facilitates the movement of students from the BSN into Masters Degrees in nursing (MSN), as some MSN programs only accept students from accredited programs.
NSC’s CCNE accreditation is independent of its accreditation with the Nevada State Board of Nursing. 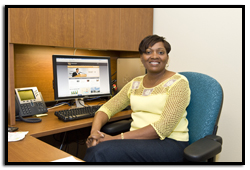 Dr. Young brings over 20 years of experience working within the public and private education field to the college. Prior to her hire at NSC, Young worked at North Carolina A & T University as the Director of Graduate Admissions.
Young offers NSC the guidance and foresight necessary to help the college best serve its students in the coming years. Young officially took her position at the beginning of the Fall 2009 semester.
Speaking to her eagerness about NSC’s growth potential, Dr. Young said, most people working in higher education don’t have the opportunity to be a part of laying the ground work for an institution as young as NSC. It is a unique opportunity.
In this newly created position at the college, some of the tasks Dr. Young will focus on will be the ongoing development and refinement of the 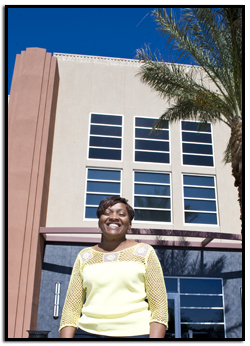 enrollment programs at the college, formulating policies and procedures affecting NSC’s students and faculty, and fostering the continued growth of the Student Academic Center. As Executive Director of Student Programs, Young will be working closely with Provost Dr. Lesley DiMare as well as many other senior administrators.
Nevada State has a place in this state and this economy. What the college can provide to the state of Nevada is incredible, said Dr. Young.
In addition to her extensive work history, Young holds memberships with the American Association of Collegiate Registrars & the National Association of Graduate Admissions Professionals.

Nevada State College Assistant Professor of English, Dr. Daniel Grassian, Ph. D., casts an investigative eye on Hip-Hop generation writers, as he brings post-civil rights African American literature into focus. Dr. Grassian’s latest literary work, Writing the Future of Black America, which made its debut earlier this year, draws on the relevance of the literary works of Hip-Hop generation authors, which has served as the inspiration for a new generation of writers. Also serving as NSC’s Department Chair of Humanities, Dr. Grassian explores this new wave of writers, as he strives to engage a younger generation of readers.
The book critically examines the works of eight African American novelists, essayists, poets and playwrights of the Generation X era. Through his groundbreaking analysis, readers gain a unique insight into the literary works these authors produced in comparison to their civil rights era predecessors and their mostly white Generation X contemporaries.
As a scholar, I was interested in bringing attention to young African American writers who weren’t getting much critical acclaim, and I also wanted to explore the significance and the changing role of race, popular culture, hip-hop, ethnicity, and class in the late twentieth century, said Dr. Grassian. His scholarly pursuits for this endeavor allowed him to explore all of those topics.
Dr. Grassian’s interest in contemporary writers and the effects of their works on popular American culture can be traced back to his days as a doctoral candidate. His dissertation explored Generation X writers and their influence on the contemporary culture in America. I think it would be difficult to find many Americans younger than forty or so denying that hip-hop music has played a significant role in shaping contemporary American culture and identity.
During this process, Grassian discovered the works of a myriad of significantly talented African American writers. These writers were of the same generation as there white contemporaries, however, were not garnering the same acclaim in the public eye.
From Writing the Future of Black America, Dr. Grassian hopes to spark an interest in readers, students, and scholars alike, that will carry over into their own future studies. I hope that I will get readers thinking about not only the current and potential future status of the African American community, but also the role that race, popular culture, ethnicity, and class (among other topics) play in contemporary America.
Dr. Grassian’s previous works include Understanding Sherman Alexie, and Hybrid Fiction: American Literature and Generation X. His ongoing scholarship is yet another testament to the accomplished faculty the NSC campus community is privileged to have.
This semester, Dr. Grassian is teaching ENG 102: Composition II, and ENG 298: Writing About Literature.