By Jess Kusak
Nevada State College proudly celebrated its 7th graduating class at the 2010 commencement ceremony held on Saturday, May 8th. Family, friends, community supporters, and members of the NSC campus community gathered at the Henderson Pavilion for an evening filled with high emotion.
This year’s commencement marked a momentous occasion for Nevada State College, as the institution awarded its 1,000th degree. Just six years ago, the college celebrated its first graduating class of 13 students. That its alumni base is now over 1,000 graduates is a testament to the institution’s exceptional growth and success in such a short period of time.
The graduates were ushered into the pavilion with the traditional pomp and circumstance and were greeted by the uproarious applause of family and friends. NSC President Fred Maryanski welcomed those in attendance, and introduced the dignitaries from the Board of Regents, representatives from the Nevada Legislature, and City of Henderson. He then made special acknowledgment to those who are the heart and soul of the institution, NSC’s faculty and staff. In my 44 years in higher education, I have never seen a faculty and staff truly committed to the mission, and more importantly, to the students, than my colleagues at Nevada State College, he stated.
President Maryanski then addressed the graduates, commending their hard work and perseverance, which brought them to this milestone in their lives. Graduates, you are now a historical part of this institution, and we know you will represent it well. It has been my distinct honor and privilege to serve as your president and I wish you success as you pursue your life dreams, President Maryanski said.
Representing the student leadership of NSC, Amsala Alemu-Johnson, Nevada State Student Alliance President, offered words of congratulations to the soon-to-be graduates. We are facing turbulent times; however, Nevada State College students have been leaders in the fight for education in this state, said Alemu-Johnson. I am certain that now, more than ever, our world needs the knowledge and wisdom from people like you, she continued.
The President’s Medal was awarded to three distinguished recipients: Regent Mark Alden, Mr. Napoleon McCallum, and Clark County School District Superintendent Dr. Walt Rulffes. This honor is bestowed every year upon individuals who have proven extraordinary commitment to Nevada State College’s mission. Regent Alden was recognized for his support of NSC, even before its inception as well as his longstanding work as a member of the Board of Regents. Mr. McCallum was honored for his significant role in the success of the NSC Promise Program, which offers mentoring and scholarships to struggling middle school students in the local community. Dr. Rulffes, a 30-year veteran in education, was singled out for his facilitating the development of partnership programs that not only benefited the CCSD, but also the students in the School of Education as well.
The final award of the commencement ceremony, the Regents Scholar, was presented to NSC student Dolores Huang by Regent Kevin Page. The Regent’s Scholar is awarded to one student from each Nevada System of Higher Education (NSHE) student demonstrating outstanding commitment to academics and leadership to his/her college and community.
Following the presentation of awards, this year’s student speaker, Marijke Blokker, shared her thanks for what she gained at NSC. Before we all head off to continue our various journeys, I would like to extend my gratitude to this college, our professors, our students all of which cannot be substituted, and this opportunity cannot be replaced, Blokker stated. Offering congratulations to her fellow graduates, Blokker concluded, I commend you for your perseverance, desire to learn, and for succeeding in reaching your goal to become members of the 2010 graduating class of Nevada State College.
Following Ms. Blokker’s speech, each academic school awarded diplomas to its respective graduates. A total of 164 proud graduates crossed the stage to receive their diplomas. Among the graduates, 72 represented the School of Education, 53 were from the School of Nursing, and 39 hailed from the School of Liberal Arts and Sciences.
With the close of its seventh commencement ceremony, Nevada State College’s impact on the local economy is undeniable. NSC’s1,000+ alumni are directly contributing to the success of Nevada’s workforce.
View more photos from Commencement 2010 at our Online Photo Gallery above. 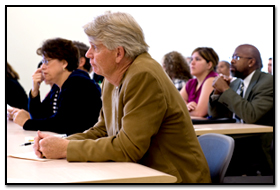 Open enrollment for employee’s benefits kicked off on May 1st and continues through the end of the month. As a cost saving measure, instead of mailing out open enrollment guides to each employee PEBP has published the guides on line. Also, only employees making changes to their coverage need to submit a form.
All participants were mailed a letter explaining the plan changes along with an Open Enrollment form. If you have not received this letter, please contact Benefits Coordinator, Lori Radecki, in Human Resources at 992-2326 or email her at lori.radecki@nsc.edu
The Office of Human Resources will be hosting meetings on campus to answer questions about open enrollment and the plan changes, where employees have the opportunity to come and learn about the various options that are best for them.
In addition, the Section 125- Flexible Spending Enrollment for 2011 Plan Year is available through employee self-service. Enrollment will close online on June 25th and paper forms will be accepted through June 30th. For more information please contact the Office of Human Resources at x2320.
The open enrollment meetings on campus will be held at the following dates and times:
May 13th 9: 00 A.M. LAS -120
May 19th 11:00 A.M. Dawson- 107

Date: May 7, 2010
To: Nevada State College Community
From: Fred Maryanski, President
RE: NEVADA STATE COLLEGE CONTINUES TO SERVE ITS MISSION
System of Higher Education unanimously reaffirmed its commitment to Nevada State College by approving our budget for fiscal years 2010 and 2011.   Nevada State’s approved budget does not eliminate any academic programs, nor does it reduce our existing faculty and staff ranks.  Rather, our budget plan calls for the continued growth of NSC with increased admissions for both first-time and transfer students.
Nevada State College is the state’s only public, comprehensive baccalaureate institution.  We offer 25-degree programs and pride ourselves on small classes and individual attention.  Nevada State’s mission is to educate the next generation of professionals for the State of Nevada, with a particular emphasis on underrepresented, first-generation, and low-income students.  NSC is the lowest cost option in Nevada for a bachelor’s degree.
On May 8th, Nevada State College will celebrate its 7th Spring Commencement at which time this institution will award its 1,000th degree.  We are pleased that so many students have come through our doors, have successfully completed their programs, and our now working in our local economy.  Our graduates come highly recommended in many fields.
NSC is successfully fulfilling the need for which it was created: providing a high quality, affordable educational opportunity for the citizens of Nevada.
Sincerely,
Fred Maryanski
President