VEGAS FROM THE HIP PHOTO EXHIBIT SHOWCASES IMAGES OF LAS VEGAS TAKEN WITH THE HIPSTAMATIC APP
HENDERSON, Nev. (April 21, 2011) Vegas from the Hip, a photography exhibit of 99 images of Las Vegas, all shot with iPhones and the Hipstamatic app from iTunes, opened at Nevada State College at 5 p.m. on Friday, April 29. 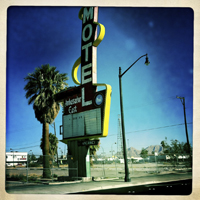 Gregory Robinson, Ph.D., assistant professor of English at Nevada State College coordinated the exhibit and selected 99 images from 41 photographers for the display. The exhibit was funded with a grant from the Nevada Arts Council.
The exhibit is open to the public and members of the media. It runs from April 29 to May 31 at the Nevada State College Library – Henderson Branch, 303 S. Water St. (BWII building), Henderson, Nev., 89015.
The concept of the exhibit came from the historic connection the Hipstamatic app has to the Hipstamatic camera of the 1980s. The iPhone app mimics the look and feel of the original, providing a tiny viewfinder, random light leaks, and changeable lenses and films. Although the iPhone camera itself is capable of providing a clear, detailed image, the Hipstamatic app does the exact opposite. The results are nostalgic images and reminiscent of the old photos found in your grandmother’s attic.
The Hipstamatic app helped to start an entire photographic movement, iPhoneography, that has spawned numerous books, blogs, Flickr groups, and hundreds of specialized apps devoted to it. Unlike a regular camera, people always carry their iPhone. Thus, iPhoneographers value quick shots, from the hip, that emphasize spontaneity over composition and dream-like blurriness over the precision clarity of high-end digital cameras. The result is a colorful, random, off-centered look at Las Vegas.
Related News Article: read more…