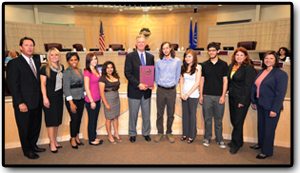 teach them English.
The District of Dobong in Seoul invited six college-aged students from Henderson to travel to Korea to help teach young Koreans conversational English and to introduce them to American culture in order to enhance the business relationship between the city of Henderson and the District of Dobong.
Elan Andruss 12, Angelica Favela 12, Trey Takahashi 13 and Ariella Youdelman 12 of Nevada State College will participate in the program and serve as youth ambassadors. The four NSC students along with two students from the College of Southern Nevada were selected based on an essay application and interview with representatives from the Henderson-Korea Business Service and city of Henderson.
I am very proud to have been chosen as a representative of both Nevada State College and the city of Henderson for this once-in-a-lifetime experience, said Elan Andruss. I know that business is becoming increasingly globalized and building relationships with foreign nations, like Korea, is vital to diversifying our economy. As a representative of my community to other nations, I will gain a better understanding of their unique culture, and hopefully, the future of our two countries will ultimately be strengthened.
The NSC students will live in Korean homes and will interact with children ranging from 10 to 14 years old. The District of Dobong will pay all of the expenses for the six college students to travel to and stay in Korea.
As part of the program, Dobong will also send about 20 middle school aged Korean children to the city of Henderson this December to learn English and socialize with American children.
The educational exchange program was established to grow the city of Henderson’s international business relationship with Korea. This is the second year of the program which builds on the success of last year’s inaugural exchange.
In December 2009, Mayor Andy Hafen, City Manager Mark Calhoun, Economic Development Manager Bob Cooper, and Henderson-Korea Business Service principals visited the District of Dobong to establish a business-driven relationship. As a result, Henderson and Dobong agreed to exchange cultural and educational experiences that will inevitably enhance their business relationship in the future.
The participating college students were honored at the Henderson City Council meeting on June 14.

Eric Mason’s road to Nevada State College was not easy. In fact, just five years ago, Eric was wandering the streets of Las Vegas, homeless and 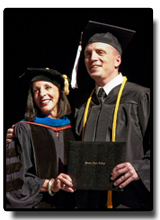 hopeless. He was battling an addiction to alcohol and drugs that cost him his job, personal relationships and possessions.
Then he entered a drug rehabilitation facility, and the experience changed his life. He has been in recovery and remained clean and sober ever since. Through his rehabilitation, Eric realized that he wanted to dedicate his life to helping others battling addiction. This goal and the encouragement of his drug counselor brought him to Nevada State College to pursue a psychology degree that would enable him to become an addiction counselor himself. Eric selected Nevada State College because of its commitment to non-traditional students. After all, Eric was in his mid-thirties, unemployed and a recovering addict. Yet, at Nevada State College, he found a safe environment where he could learn and in fact, excel.
This May, Eric graduated Nevada State College Summa Cum Laude with a B.A. in Psychology and a Minor in Counseling. He earned a 3.97 GPA and was nominated as an outstanding student and person by multiple faculty members, earning him the Regents Scholar Award which is bestowed upon one undergraduate from each institution within the Nevada System of Higher Education to recognize academic achievements, leadership ability, and service contributions. 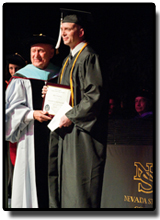 In his commencement speech, Eric spoke about his journey from addiction to graduation. He expressed gratitude to the Nevada State College staff, faculty, and students for all of their support and encouragement that enabled him to make his dreams a reality. And he challenged his fellow graduates to pay it forward to go out into the world and plant your seeds of hope, shower people with encouragement, and see how your seeds for the future blossom.
Eric is living up to his own challenge. He plans to enroll in a Master’s of Social Work program and began an internship at Monte Vista Hospital so he can complete the Certified Alcohol and Dependency Counseling (CADC) program to be a certified drug counselor. He will also serve as an intern at the Nevada Drug Court program, the same program that helped him to turn his life around five years ago. Once he obtains his counseling license next year, Eric looks forward to becoming a full-time counselor to help others battle addiction and turn their lives around. And like the counselor that encouraged him, Eric plans to encourage others to pursue their education at Nevada State College as a means to make their dreams a reality.