By Mandi Enger
After a funding gap that spanned four months, the Nevada State College (NSC) chapter of TRIO Upward Bound was notified by Senator Harry Reid’s office that federal funds would be renewed for use starting June 1, 2012. The two grants awarded by the U.S. Department of Education (DOE) will help sustain the program at NSC through 2017. 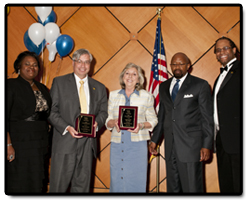 We’re extremely grateful to have received funding this spring and are now reigniting the summer program for our current students we weren’t sure it was going to happen this year, said Kimberly Williams, director of TRIO Upward Bound at NSC.
The national program aimed to assist high school students in preparing for a college education was established locally at NSC in 2007 through a partnership with the Clark County School District. Each year 100 new students in grades 9 – 11 from low-income families have been accepted into the program.
Leading up to 2010, Upward Bound programs across the country applied for federal grants every three years, with awards being made by the DOE every fourth year. However, the grant competition was put on hold in 2010 for the disbursement of 2011 funds. Rather than holding another competition, the DOE forward-funded programs awarded in the first slate of the previous cycle.
In-turn, programs such as NSC’s that were supported by a second slate of funding made available through the College Cost Reduction and Access Act of 2007, were excluded.
2012 was the first opportunity for all programs to reapply.
By being a little frugal and deliberate in the last few months of 2011, we were able to keep the program afloat while applying for the 2012 funding competition, Williams continued. We know the need for program support across the country is immense and we are honored to be one of the 780 programs funded out of the 1,500 applications received by the U. S. Department of Education.
High schools served since the program’s inception at NSC include Basic, Eldorado, and Sunrise Mountain High School. With the receipt of renewed funds, the program will be adding Chaparral High School this year.
Upward Bound students participate in activities such as tutoring, ACT test preparation, financial aid counseling and college tours at no cost to their families. Students are additionally required to attend Saturday classes during the school year as well as a six-week college preparation academy in the summer. Our students are truly committed to their mission of attending and completing college, noted Williams.
Approximately 60 local students will now be able to take part in the program sessions this summer. Classes will last six hours each day emphasizing courses such as science, math, and foreign language.
Last April, NSC’s Upward Bound celebrated its third award ceremony and graduation. Over 20 high school seniors completed the program and will head towards college this fall. The 2012 graduates were joined by Congresswoman Dina Titus, a longtime supporter of the program.
Upward Bound will continue to stay in touch with graduates as they progress through their college careers, although students are also encouraged to join support programs at the undergraduate level. Once Upward Bound, always Upward Bound, stated Williams.
Our job is really to supplement the educational opportunities students receive during high school, she finished. We really dig down deep and give students that extra support needed to successfully reach college and our efforts are truly made possible through federal and institutional support. 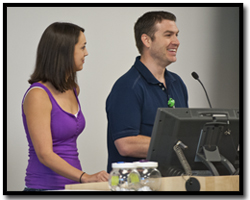 A feeling of excitement and anticipation filled a classroom at the Clinical Simulation Center on May 18, 2012 as three new cohorts of Nevada State College nursing students arrived for the program orientation. The 48 nursing majors were recently accepted into the highly competitive program and will begin taking classes during the fall semester starting on August 20.
During the orientation, the new cohorts were welcomed by the NSC nursing faculty, President Bart Patterson, current students in the program, and the Student Nursing Association.
Nursing school is unique because it involves more than just book knowledge. While it does require you to be a good book learner, it also requires you to have a sense of what’s right and what’s moral, Assistant Dean Sherri Coffman said to the group as the orientation opened. Additionally, you need to have a good sense of who you are as a person; how you can be a therapeutic presence in the life of your patient; and how you can interact with patients in a way that makes them feel comfortable and confident that you know what you are doing.
Students were also encouraged by Coffman to recognize the importance of classmate encouragement and support. Know that you will form friendships during nursing school that will last a lifetime, she said.
Juniors and seniors then introduced the newly accepted students to the program by sharing lessons they had learned early in their studies such as: form study groups early, build strong organizational habits, and attend open lab as often as possible. 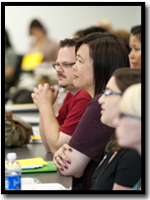 Nursing is more than a profession, it is a way of life, stated Jesse Collier, a fourth-year nursing student as he shared his admiration and appreciation for the nursing faculty and other students in the program. Collier and his wife, Allison Collier, who also spoke to the new groups, are working to complete their BSN degrees in May of 2013.
NSC admits nursing students into three program cohorts during both the fall and spring semesters including: regular, part-time and accelerated tracks.
We are able to accept 16 of the top applicants to each program track to maintain a 1-to-8 faculty-to-student ratio, said Dean Shirlee Snyder. Our standards are set high to prepare our students for the intensive nature of the BSN coursework.
While program applicants are required to have a 3.0 GPA in nursing prerequisite classes, students are encouraged to achieve a 3.5 average or higher in order to remain competitive. 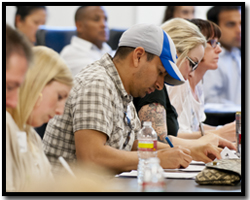 It’s an amazing feeling to have been accepted to the nursing program as I’ve worked really hard for the last couple years to complete my prerequisite courses, said Linda Cirillo, a regular track student starting the program this fall. Working through the next couple years will be an amazing journey. I’m looking forward to new challenges and ultimately being able to help patients in my care.
This fall’s groups is quite diverse which will really add to the students learning but also to the nursing profession overall, added Snyder.
Approximately 700 students have graduated with Bachelor of Science in Nursing degrees since the college’s first commencement ceremony in 2004. Currently, there are 385 total students enrolled in the program.