By Mandi Enger
A nine-year tradition for the Nevada State College School of Nursing, the Healing Presence Ceremony was held at the Family Justice Park on Monday, September 24, 2012. The ceremony takes place each fall and welcomes current nursing students and faculty, nursing alumni, as well as faculty and staff from across the NSC campus. This year, over 100 individuals participated.
As the School of Nursing’s curriculum is based on caring as a professional nursing concept and way of being, the ceremony is organized as an opportunity for individuals to reaffirm their commitment to this principle.
We hold this ceremony to acknowledge the dedication of each student and faculty member to professional nursing, shared Sherrilyn Coffman, dean of the school of nursing at the opening of the event. This ceremony recognizes the intensive study and personal reflection that are required in the nursing program.
The ceremony begins with participants forming a large circle on the park’s grassy knoll. Then, the group divides into seven lines; each representing one of the seven steps of self-development noted in The Art of Being a Healing Presence by Miller and Cutshall. A nursing student at the head of each line recites an excerpt from the book, detailing one of the steps including:

By Mandi Enger
Students, faculty and staff had a unique opportunity during the fall 2012 semester to contribute to the history of Nevada State College by taking 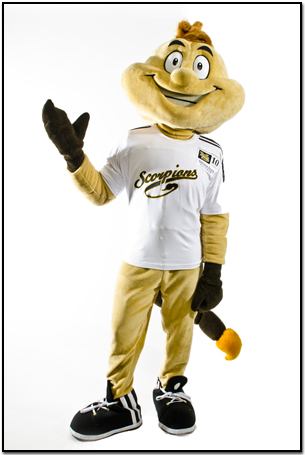 part in the official naming of the college’s scorpion mascot. The name “Scotty” was chosen during the campus-wide selection process held September 4 – 21.
Suggested by a student, the acronym SCOTTY stands for Scorpion Community of Today, Tomorrow, Yesterday.
During the first two weeks of the process, the campus submitted over 200 name ideas for the mascot via an online nomination form. The names Scotty, Sullivan and Stinger were then selected from the full list of nominations as finalists by an on-campus committee comprised of students, alumni, faculty, staff and administrators. The committee selected the names based in part on the name’s total number of submissions as well as other criteria such as creativity and how it reflected the spirit of NSC.
The final round of voting was open for one week, closing on September 21. Nearly 250 total votes were received.
The overwhelming participation and enthusiasm for the naming of our mascot is a true representation of the spirit and campus pride at Nevada State College, commented NSC President Bart Patterson.
In 2002, the first class of NSC students also had the chance to be a part of the college’s history as they voted to select the institution’s mascot and colors. During our early years, gold scorpions made regular appearances around the Dawson building, said Rho Hudson, Ed.D., an associate professor of education. The scorpion mascot and the school colors of gold and black were a perfect fit with our surrounding landscape.
The college’s six-foot scorpion mascot was first introduced, without a name, to the campus and community in April of 2012 during the Henderson Heritage Parade.

By Mandi Enger
As the grand finale of Nevada State College’s yearlong anniversary celebration, the college is holding its 10th Anniversary Gala on Friday, October 19, 2012. The event will commemorate a decade of the college’s growth from its key founders and supporters, to the achievements of its alumni, students and faculty.
The event will be held at the Green Valley Ranch Resort starting at 6:00 p.m.
Our students, faculty, staff, and administration are proud to be coming together with our valued community to reflect upon the college’s growth over the last ten years while also looking forward to the next, said NSC President Bart Patterson. Nearly 450 guests have confirmed their attendance at our celebration to-date.
Hosted by the Nevada State College Foundation, all proceeds will benefit student scholarships, daily operations, and initiatives supporting both students and faculty.
During the event, the college will recognize several groups and individuals who have been instrumental in the establishment of the college.
10TH ANNIVERSARY HONOREES:
City of Henderson
Gibson Family
The late former Gov. Kenny Guinn
Greenspun Family Foundation
Nevada Board of Regents
Selma F. Bartlett
Members of the Nevada Delegation of the 107th Congress U.S. Sen. Harry Reid, former U.S. Sen. John Ensign, U.S. Rep. Shelley Berkley and former U.S. Rep. Jim Gibbons
Members of the 71st and 72nd Sessions of the Nevada Legislature represented by Speaker Richard D. Perkins and the late State Sen. William J. Raggio
Nevada State College Foundation Chairmen James E. Rogers, William E. Martin and Glenn C. Christenson
Former Nevada State College Presidents Dr. Richard Moore and the late Dr. Fred Maryanski
Station Casinos
Through a combination of legislative efforts, helping to secure the campus grounds, fostering community support, and fundraising, the dedication of our 10th Anniversary Honorees has been an essential part of the college’s success, continued Patterson.
Sponsorship opportunities and individual tickets for the anniversary gala will be available through Friday, October 5. For more information, visit the anniversary website or email Brandi Robinson at brandi.robinson@nsc.edu.