Thank you! Your submission has been received!
Oops! Something went wrong while submitting the form.
Home Academics Angela M. Brommel, MFA, MA, CFRM 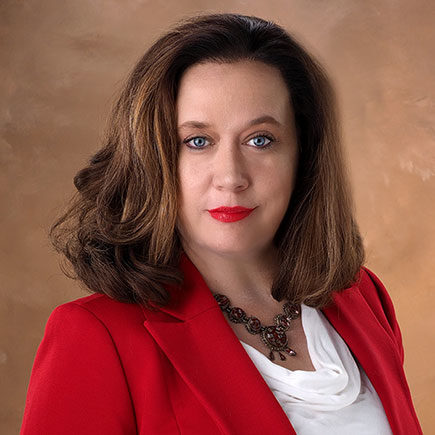 Angela M. Brommel is Executive Director of the Office for the Arts, Chief Curator of the Nevada State Collections & Galleries, and affiliate faculty at Nevada State College. She received her MFA in Creative Writing with an emphasis on Poetry from Antioch University Los Angeles. She received her MA in Theatre from the University of Northern Iowa. Her playwriting thesis was a semi-finalist in The Chesterfield Writer’s Film Project. She received a Graduate Certificate in Women’s Studies from UNLV, and received Certificates in Fundraising Management and Current Affairs Fundraising  through The Fund Raising School at the University of Indiana University–Purdue University  Indianapolis (IUPUI).

She is the author of two books, Mojave in July (Tolsun Books, 2019) and Plutonium & Platinum Blonde (Serving House Books, 2018). Her poetry has been published in the The Best American Poetry blog, the North American Review, The Literary Review’s (TLR) Share, and many other journals and anthologies. Angela was awarded the 2017 Helen Stewart Poetry Award, and in 2018 she was a Red Rock Canyon Artist in Residence, serving as the inaugural poet of the program.  Recently she was invited by  a2ru ( Alliance of the Arts in Research Universities) to be a founding editorial board member of their new peer-reviewed open access online journal: Tradition Innovation in the Arts, Design, and Media Higher Education. She currently serves as Editor-in-Chief and Poetry Editor for The Citron Review.

An interdisciplinnary artist-scholar whose creative scholarship crosses Art, Creative Writing, and Theatre, some of her areas of interest and research are art and literary history, feminist criticism and theory, defamiliarization as feminist praxis  in the work of women writers and painters, integrating the arts across curriculum and the student experience, the arts as a healing modality, and the role of the artist in economic development and tourism. In 2008 she was awarded the College’s iTeach award for Innovation, and in 2016 she received the College’s first award for External Affairs.

Under her leadership the Office for the Arts has developed vibrant programs like The Artist at Work Series, The Campus as Museum, and this fall, the new Marydean Martin Writers’ Project.

As Chief Curator,  she has curated the Nevada State Collections & Galleries, including a public mural program, which features 127 works by Nevada artists and writers. Through the initiatives, The Arts at Nevada State and The Arts Offiste, Angela has created awareness and connections between the Nevada State community and the arts and cultural organizations locally and across the state.

Angela serves on the Board of Trustees for Henderson Libraries,  City of Henderson’s Art Council, and previously on the city’s Commission on Economic Development & Tourism.