Thank you! Your submission has been received!
Oops! Something went wrong while submitting the form.
10.25.11 | Campus News 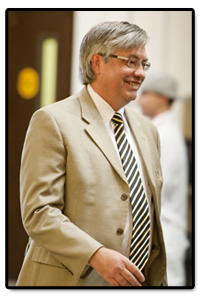 Patterson currently serves as vice chancellor of administrative and legal affairs for the Nevada System of Higher Education (NSHE). He will succeed President Lesley Di Mare, who has accepted the presidency at Colorado State University-Pueblo
“Bart Patterson brings a wealth of credibility, intellect and critical thinking to the presidency, as well as his experience as a long-standing advocate for Nevada State College’s mission,” said Jason Geddes, Board of Regents chair.
Patterson was appointed as the vice chancellor of administrative and legal affairs in September 2009, having previously served as the NSHE’s chief counsel since August 2006. As vice chancellor, he has responsibility for human resources, purchasing and legal operations statewide, and he manages the Las Vegas system office.
Patterson has a long history of supporting the college. Many Nevada State College students may recognize him from his role as an adjunct instructor in public policy at the college. In addition, one of Patterson’s first jobs in the state’s higher education system was as general counsel to NSC, and he has been in the system through virtually the entire history of the college.
I have long supported the mission of Nevada State College, and I am excited to be able to serve this growing institution, Patterson said. As the college goes through this transition period, I remain committed to working with the administration, faculty and students to continue to build on the ongoing success of this young institution.
Patterson visited the campus on Monday, Oct. 24, to meet with students, faculty, and staff.