Thank you! Your submission has been received!
Oops! Something went wrong while submitting the form.
12.17.10 | Campus News

By Jess Marvin
Long known as a professor who emphasizes the importance of community-based learning in his classes, Dr. Hon-Vu Duong (better known as Dr. D to his students), is a living example of the difference one can make by serving communities in need.
This year alone, Dr. Duong has gone on three separate relief missions to Haiti and Vietnam with a team of U.S. ophthalmologists to perform eye surgeries and other essential procedures for people in need.
In April, Duong traveled to Haiti just months after the country’s devastating earthquake. Though his most recent trip was prompted by Haiti’s 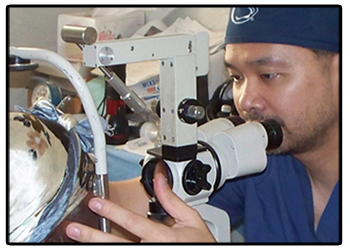 earthquake, his work in Haiti is not a new undertaking. He started traveling to Haiti several years ago during his residency at Howard University. While at Howard, Duong became involved with Friends of the Children of Lascahobas, a U.S. based non-profit organization. Duong fell in love with the program and was the only ophthalmologic resident at Howard to do two back-to-back missions as a second- and third-year resident. Since 2003, he has gone to Haiti every year to perform sight-restoring surgeries.
The eye surgery team Duong most recently traveled with in Haiti provided cataract surgeries to restore sight, other reconstructive surgeries, and additional forms of medical intervention to improve the overall quality of life for Haitians. Given the earthquake’s devastation upon the country, Duong and the team knew going in that there would many more unknown variables. During his mission to Haiti in April, Duong and his colleagues worked with Haitian medical teams in Port Au Prince and Lascahobas in triage treating earthquake victims, in addition to performing cataract and other eye surgeries.
The devastation was so profound. Duong said, referencing Haiti’s condition. The hospital the team worked out of in Lascahobas, which is located about 45 miles east of the country’s capital, did not suffer much damage. However, the Haitian government estimated at the time that there were between five to ten thousand Haitians living in makeshift tents in Lascahobas that had been displaced from Port Au Prince.
Days in the clinic, Duong recounts, were long and taxing. This year proved especially trying as the team’s support staffs were reduced by nearly half. Despite these setbacks, Duong and his team worked until the last patient was treated. The clinic, which opened at 8 AM and closed around 8 PM, served approximately 700 patients in a one-week period.
Duong’s relief did not end in Haiti. In June, Drs. Duong & Westfield joined up with the Hawaiian Eye Foundation as well as other ophthalmologists from across the U.S. to work in Hue, Vietnam. Duong’s medical team provided educational training to Vietnamese ophthalmologists on the most current surgery techniques. Duong lectured on basic oculoplastic surgery, assisted in the cataract wet-lab, instructed surgery residents, and offered consultations during the five-day mission. Duong returned to Ben Tre, Vietnam in November, with a team of ophthalmologists and optometrists, providing both medical and surgical eye care.
After each mission, Duong shares his experiences with his students. They are hard trips, says Duong, but well worth it. Though modest about discussing his relief work, Duong is perhaps providing the best teaching model for his students leading by example.