Thank you! Your submission has been received!
Oops! Something went wrong while submitting the form.
07.26.12 | Campus News | School of Liberal arts & Sciences

By Mandi Enger
In 1999 Peter La Chapelle, a current associate professor in the Humanities Department at Nevada State College, made a historical finding while 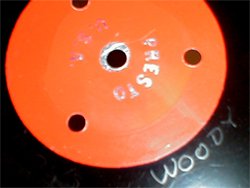 working on his Ph.D. at the University of Southern California (USC). While conducting research for his dissertation, La Chapelle was given a tip during an interview with political activist Harry Hay, which led him to the discovery of four unknown and previously unreleased songs produced by folk artist Woody Guthrie who is known for penning such songs as This Land is Your Land.
The four songs, recorded off the two discs I found, are essentially the oldest known Woody Guthrie recordings in existence, said La Chapelle. The discs, called Prestos, were 10-inches in diameter, ran at 78 rpm and were composed of lacquer-covered aluminum. They had been donated to the Southern California Library for Social Studies and Research in south central Los Angeles by Hay who had been with Guthrie at the time of the recordings.
The song recordings likely date to 1939. They are older than the famous Alan Lomax-Library of Congress recordings and older than the RCA Victor Dust Bowl Ballads album, he continued.
Woodrow Wilson Woody Guthrie (1912-1967), who reached national fame in the 1940s with songs such as This Land is Your Land, and So Long it’s been Good to Know You, would have celebrated his 100th birthday on July 14, 2012.
In commemoration of Guthrie’s life as a singer, songwriter, and artist, the Smithsonian Folkway released a three-CD box set this July titled Woody at 100: The Woody Guthrie Centennial Collection. The set contains a large-format book in addition to 57 tracks including the four songs recovered by La Chapelle: Skid Row Serenade, Them Big City Ways, Do Re Mi and I Ain’t Got No Home (In This World Anymore). La Chapelle additionally contributed an essay detailing his research and findings to the written portion of the set.
After completing his dissertation at USC, La Chapelle turned his research into a book, Proud to Be an Okie, referencing his investigations in Los Angeles and Woody Guthrie findings in chapter two.
Read more about La Chapelle’s discovery and the Woody Guthrie centennial album in the Los Angeles Times.