Thank you! Your submission has been received!
Oops! Something went wrong while submitting the form.
05.02.12 | Campus News | School of Liberal arts & Sciences 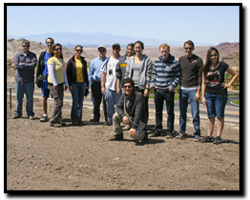 (or XRF analyzer gun) during two field trips taken by the class during the spring 2012 semester. The hand-held device is commonly used in the field by environmental scientists surveying areas for heavy metal contamination. Visiting both the historic Nelson mining area and Three Kids Mine near Lake Las Vegas, the group of Nevada State College students examined old mine tailings for select pollutants such as lead, arsenic and cadmium.
Experience operating tools like the analyzer gun is integral for our students as they head toward their careers, stated Edwin Price, assistance professor of environmental science. The field trip locations we selected included local lands that are currently being processed for redevelopment work largely done by environmental scientists.
The Three Kids Mine area is slated to be transformed into a residential and business development once hazardous waste is properly removed or contained. The property was originally a manganese mine that closed in 1962.
Scientists working on similar projects often collect samples in the field that must be sent to the lab for full analysis. However, utilizing the XRF analyzer gun, they are able to cover more ground and collect larger amounts of data. 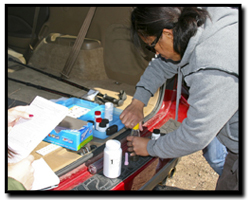 The device works by sending x-ray radiation into soil samples drawn from mine tailings, exciting the atoms in the samples. The atoms in turn give off their own radiation which the barrel of the gun detects and separates into different elements, telling the user what contaminates are present.
The data stored in the analyzer gun can then be downloaded to a computer and populated into an Excel database for further examination.
In conjunction with testing the XRF analyzer gun, our students learned procedures for its use defined by the US Environmental Protection Agency, Price continued. According to the national standards, samples must be collected and sent to the lab in addition to the data collected on-site for verification and calibration.
Data collected by students showed low traces of arsenic at both sites.
Price organized the two-week rental of the XRF analyzer gun for the class using funds collected through lab fees. 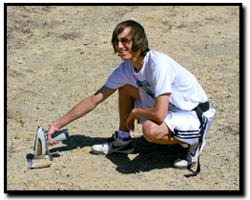 This was the first time we’ve been able to offer this opportunity to our students and look forward to future experiences with advanced equipment and technology,” he concluded.