Thank you! Your submission has been received!
Oops! Something went wrong while submitting the form.
05.04.12 | Campus News | School of Liberal arts & Sciences

Students in a NSC history senior seminar conducted research for their final papers at a local solar power plant during a recent field trip. Accompanied by Peter La Chapelle, associate professor of history in the School of Liberal Arts and Sciences, the students in the technology-themed capstone course travelled 12 miles south of Boulder City to visit One withthe task of comparing the modern plant to a solar thermal production plant that was constructed in Maadi, Egypt, in 1913 by American scientist Frank Shuman. 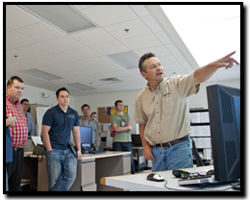 We are interested in finding out why a similar technology in Egypt was dismantled over 100 years ago, La Chapelle said. Throughout the semester, students have been researching the politics, marketing strategies and diplomacy that contributed to the disappearance and then reappearance of this technology.
Plant Manager Bob Cable welcomed approximately 15 students to the facility during the April field trip and led them on a tour of Nevada Solar One, the largest thermal solar plant built in the last 20 years. Cable started the presentation in the control room overlooking the field and then explained the process of how heat from the sun, concentrated and collected by large curved mirrors, is used to create electric power.
The parabolic concentrators, or structures containing the mirrors, adjust throughout the day to align with the sun. The heat of the sun is reflected by the curved mirrors towards tubes in the center holding a heat transfer fluid. By transmitting the captured heat in that fluid to water, steam is created which in turn runs a turbine to create electricity.
The sun heats the focal point to 1,000 degrees Fahrenheit and the heat transfer fluid rises to 700 degrees Fahrenheit, said Andy Kuniyuki, Dean of the School of Liberal Arts and Sciences who joined the class for the tour. This process captures 70 percent of the input solar energy. The technology is simply fascinating.
As Cable continued the tour, students were directed down to the solar field to watch the movement of the mirrors up-close as they veered towards the sun.
It was interesting to take an in-depth look at the equipment at Nevada Solar One. One of the things we noticed was how similar the modern day equipment is to Shuman’s original 1913 plant in terms of basic design, La Chapelle said, after completing the tour.
The plant in 1913 was built in Egypt. However, it was funded largely by England and then Shuman used the plant to get money from Germany, said Chris Reed, a student focusing his research on the political implications that led to the demise of the original plant. Its closing was all about diplomacy, money and the politics surrounding World War I.
Our students made two significant findings: First of all, large deposits of oil were discovered around this time and, secondly, the war shifted

attention to gasoline-powered technologies since it would certainly be impractical to power a tank with solar energy, La Chapelle said. This coupled with the Shuman’s death in 1918 and the loss of governmental support for solar energy meant that similar technologies were not significantly used or experimented with again until the 1980s.
As with Shuman’s plant in the early 1900s, solar technology will need to get to a point where the manufacturing costs are vastly reduced, or we many never experience a time when solar power is used exclusively, commented another student, Codi Lingenfelter. An important fact that I found throughout my research was that we do have the technology, what we need is the investors. If there was enough interest from the government on actual ways to benefit from renewable energy sources, the manufacturing costs would come down enough to make solar energy a reliable energy source for areas such as Nevada where there is an abundance of sunshine and empty desert to set up the facilities.
This semester students in the class, HIST 499: Senior Seminar in History, focused their papers on problem-solving history, taking up topics within the field of the history of technology that relate to some of the most pressing questions of the 21st century: access to water, conflict over energy resources, and the future of transportation.
Other groups in the class were assigned to research topics including the history of the Woods gasoline-electric hybrid car (1916-1917) and the history of walking machines (essentially attempts to build a wheel-less transportation from the nineteenth century to the present).
In addition to the field trip, students examined library resources such as journal articles and periodicals dating back to the period specific to their project.
For more information about NSC’s history degree program or HIST 499: Senior Seminar in History, visit the history department online or contact Dr. Peter La Chapelle by emailing Peter.LaChapelle@nsc.edu.