Thank you! Your submission has been received!
Oops! Something went wrong while submitting the form.
04.10.12 | Campus News 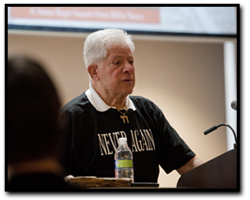 speaking series as a segment of their semester coursework. Organized on campus by Dr. Shirli Brautbar and funded by a generous honorarium from the Nevada State College Foundation, the speakers broadened the students understanding of the Holocaust by putting a face and a voice with the history lessons learned in the classroom.
I’m in awe just seeing a survivor of the Holocaust, said Rishawn Conley, a psychology and nursing major. This series was a great opportunity to hear directly from survivors on what they’ve endured.
Local Holocaust survivors including Ben Lesser and Stephen Nasser presented to the class and NSC community in NSC’s Dawson Great Hall at events throughout the semester. Students were challenged by each speaker to not only acknowledge the devastating events of the Holocaust but to understand that they have a strong role in making sure that they are never repeated.
You are of the last generation able to hear from survivors in an era where civilization lost its humanity, opened Ben Lesser during his March 8 presentation. Do not be a bystander as intolerance takes place.
Lesser went on to detail the tragic journey made by his family starting in Krakow, Poland that led to Jewish ghettos and eventually concentration camps. Of five children, only Lesser and one sibling survived.
The evil can lurk in all of us. Keep it at bay. Learn to build up love and tolerance, Lesser advised. 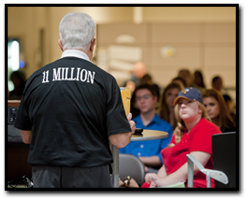 Stephen Nasser, a Holocaust survivor born in Budapest, Hungary, shared Lesser’s focus on the value of all human life as he spoke to NSC students on March 29.
I want to remind all of you to worship your families. Bickering is so minute compared to life; love is much stronger than hate, he said.
Of 21 family members initially pulled from their home by Nazi forces in 1944, Nasser was the only survivor at the end of World War II. Inspired by some of his brother’s final words in the Muhldorf concentration camp, Nasser completed his memoir My Brother’s Voice after the camp was liberated.
No matter what we read, it doesn’t compare to what we can hear. It’s our job to get the stories out for those who did not survive, added Nasser.
Dr. Brautbar teaches the History of the Holocaust course biennially at NSC and works with organizations such as the Las Vegas Holocaust Survivor Group to organize speaking opportunities for each class.
It’s important that we provide the opportunity for our students to acquire knowledge of the Holocaust and recognize its impact from those 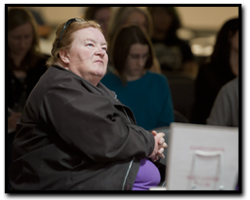 individuals who have experienced it first-hand, said Brautbar. Upcoming generations will not have the chance to meet face-to-face with survivors, hear their stories, and have their questions answered.
For more information on NSC history courses or upcoming speaking events, contact Dr. Brautbar or visit the history program section of NSC website.