Thank you! Your submission has been received!
Oops! Something went wrong while submitting the form.
06.25.10 | Campus News | School Nursing

By Jess Kusak
Students choosing nursing as their field of study at NSC endure a rigorous program. So rigorous, in fact, that many students often have to grapple with the decision as to whether they can commit to the full academic schedules because of family and work obligations. In response to the needs of many students facing this dilemma, the School of Nursing established a part-time Bachelor of Science nursing program that started in Fall 2009. 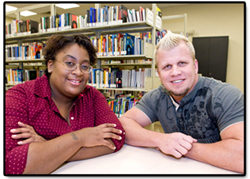 The part-time program has the same rigor as the regular program, however, it provides students with more time for their family and work obligations, said Assistant Dean of Nursing Ruby Wertz.
As the only part-time nursing program in Nevada, and one of very few across the nation, the program directly answers the needs of students desiring a degree in nursing who must maintain work and family commitments.
NSC was able to offer the pilot part-time nursing track through a grant from the U.S. Department of Education, said Dean of Nursing Shirlee Snyder. She explains that while the grant ends July 2012, NSC will, however, continue to offer the BSN part-time track upon completion of the grant.
In the short time since its inception, the program has been popular among prospective nursing students. Additionally, the program has also been popular with current nursing students enrolled in other degree tracks. Citing the convenience many students have seen in the part-time program, Wertz noted, we’ve even had requests from some of our regular and accelerated track nursing students to transfer into the part-time BSN program, for reasons that it provides them more of a balance with their obligations outside of their studies.
Students accepted into the part-time program begin this track in the Fall and Spring semesters. The program is completed in eight consecutive semesters, including summer, which puts students on schedule to receive their Bachelor of Science in nursing in two and a half years.
Part-time nursing track student Rob Willis cites the part-time program as being a better fit for his life. I initially enrolled in the full-time program but being a single father who needs to work and pay the bills, I worried how I’d juggle everything. With the part-time program, I can attend my classes, work almost full time, and have a balanced home life with my kids, Willis said. He cautions that while the average class load is 4-9 credits per semester (half the credit load of the traditional nursing track), students still have to put much effort into their studies. My fellow students and I learned pretty quickly that even though this is a part-time track, there’s definitely still a full-time commitment to the course work!
Classes, labs and clinical practicum experiences are Thursday through Saturday during both day and evening hours. The program meets two to three times per week, so I’ve been able to easily manage my time and work my classes around my schedule as well, said part-time track student Shakira McDonald. Like Rob, Shakira transferred into the part-time program when it was created so she could maintain her employment. Both students will be among the first graduating class from the part-time BSN program.
Currently, the program admits 16 students per semester. Wertz adds, as budget allows, program administrators will be able to increase the number enrolled into the program.
For additional information about NSC’s part-time nursing program, visit http://archive.nsc.edu/3788.asp