Thank you! Your submission has been received!
Oops! Something went wrong while submitting the form.
07.10.09 | Campus News

There’s no better promise than a future of possibilities. In essence, that is what the NSC Promise Program is all 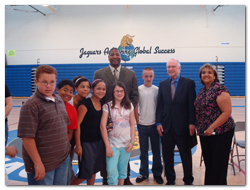 about. It is a new program implemented by Nevada State College in an effort to reach out to disadvantaged sixth-grade students, teaching then the importance of preparing for college.
“Research shows that traditionally disadvantaged students without positive role models are less likely to attend college, said Nevada State College President Fred Maryanski. Our goal with the NSC Promise is to teach these sixth graders the importance of going to college, provide them with positive role models and show them that college is financially viable.
Each year, NSC will coordinate with as many as six elementary schools for the NSC Promise Program. Schools that have already participated include Burkholder Middle School in Henderson and Cannon Middle School in Las Vegas.
As part of the outreach initiative, local personalities, business leaders and government officials who are college graduates share their personal stories about the importance of preparing for and graduating from college. These individuals lend perspective to the students on how a college education opens doors to future success.
Among the local role models lending his time to the NSC Promise Program is former Los Angeles Raiders running back Napoleon A. McCallum. The U.S. Naval Academy graduate, who now serves as the Director of Community Development for the Venetian Resort Hotel Casino, is among those offering their time to encourage middle school students to become college graduates.
The NSC Promise Program is a joint effort between the Offices of Student Financial Services and Scholarship and 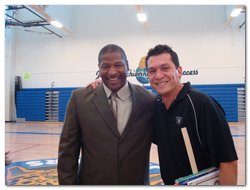