Thank you! Your submission has been received!
Oops! Something went wrong while submitting the form.
08.05.08 | Campus News 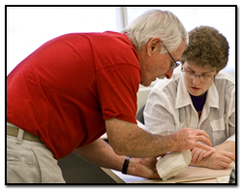 Officially named Invigorating High School and Middle School Earth Science Through Inquiry and Student Research, the workshop was designed by Lawrence Rudd, Ph.D.an assistant professor in the Nevada State College School of Education, for local science teachers to acquire a better understanding of regional geology and develop classroom lessons that encourage students to think about the science that literally exists in their own backyards.
It focused on a mode of education referred to as inquiry-based learning, a 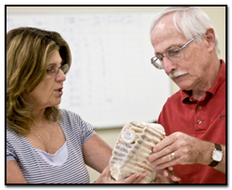 curriculum focus in the Nevada State College School of Education where students learn through questioning.
Throughout the two weeks, the participating teachers took field trips to local areas of geological interest, conducted studies and experiments in a classroom setting and took a three-night field trip to the Western Grand Canyon. 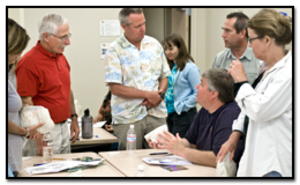 Chemberyle Simoneau-Oelrich, a graduate of Nevada State College currently teaching biology at Valley High School, said learned many things she would bring back to the classroom with her this fall.
There’s a lot of good content that I can use with my students, she said.
She also emphasized the overall value of the program.
I’m earning credits, I’m learning exciting geological information, I’m going on a vacation to the Grand Canyon and I’m getting paid, Simoneau-Oelrich said. How much cooler could this be?
During the workshop session on Friday, July 25, Steve Roland, Ph.D., a UNLV Professor of Geo Science brought in casts made of actual prehistoric giant mammoth teeth.
I’ve learned more here than in any other professional development class, Roy Kight, a science teacher at Northwest Career and Technical Academy, said while examining the fossils. It is the best I’ve ever attended, and we haven’t even been to the Grand Canyon yet.
The fossils were discovered in the 1990s at the Gilcrease Nature Sanctuary in Las Vegas, a recreation and information facility dedicated to wildlife needs. The fossils are evidence of mammoths drinking from an Ice Age spring that was located where the Nature Sanctuary is now and belong to its permanent collection. There are still ongoing examinations of the ancient bones being conducted in that area.
Nevada State College is a comprehensive four-year public college offering degrees including nursing, business administration and education. The college opened its doors to students in September 2002 after the Board of Regents and the Nevada State Legislature determined the need for enhanced educational opportunities in Southern Nevada in 1997.
NSC’s main campus is located on more than 500 acres in the foothills of Henderson and provides progressive bachelor’s programs in several in-demand fields of study. Nevada State College offers a low student-to-professor ratio and competitive tuition rates.
For more information on Nevada State College, call : 702.990.2000 or visit : nsc.edu.