Thank you! Your submission has been received!
Oops! Something went wrong while submitting the form.
04.19.10 | Campus News

Cory provides quality customer service, and by doing so he creates a sense of community at NSC. It is for this that Cory is a phenomenal example of 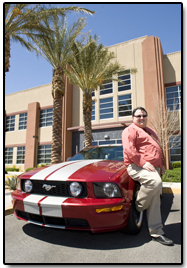 an NSC Star! -Angela Brommel
For three and a half years, Cory has been a proud member of the NSC campus community. During his time at NSC, Cory has worn many different hats. He began working in the Nevada State Bookstore as the Textbook Coordinator, where he consistently increased the number of used textbooks provided for students each semester. He also played an integral role in the launching of the Bookstore’s online textbook ordering system. As of July 2009, Cory took on a new position in the NSC Cashiers Office as Student Account Representative.
Cory’s dedication to being a member of the NSC staff shines in his work and his daily interactions with students, faculty and staff. While NSC considers itself lucky to have Cory on board, he’ll be the first to tell you he’s the lucky one. As he said it best, I’ve been very fortunate to work with amazing people. Everyone is dedicated to the growth of the college, and there is a real feeling of family amongst the campus as a whole.
As an avid video gamer, you can find Cory playing video games in his leisure time it started with Pong, and he hasn’t stopped since!