Thank you! Your submission has been received!
Oops! Something went wrong while submitting the form.
03.01.10 | Campus News

Sculpture Brings Beauty and Inspiration to the LAS Building

By Jess Kusak
Students entering the Liberal Arts and Sciences Building this past semester were greeted by not only NSC faculty and staff, but also by a 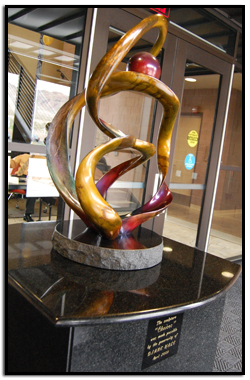 distinguished and inspirational sculpture in the building’s main entrance way. Prominently positioned for all to see, the bronze cast sculpture appropriately named Choices embodies the crossroads of the collegiate years and beyond.
When the Liberal Arts and Sciences Building was being built, Associate Dean of Liberal Arts and Sciences Dr. Andy Kuniyuki had high hopes that artwork would one day be featured throughout the building. But since budget cuts were starting to take effect in the state, there was unfortunately not enough funds to furnish the new building with artwork as Kuniyuki had hoped.
I wanted to physically represent the fusion of arts and sciences that this building was going to have and allow for students to see that college was more than just coming to class, shared Dr. Kuniyuki.
As a devoted fan of the artwork of local artist Bill Wilfong, Kuniyuki displayed pictures of the artist’s work throughout his office. The pictures were often the subjects of conversation to those visiting his office, which would reignite the thought of bringing artwork to the campus building. Such a conversation took place with Diane Hale. Ms. Hale was a supporter of bringing a Wilfong sculpture to the LAS building, and decided to donate the piece to the School of Liberal Arts and Sciences.
The LAS faculty and staff selected Choices, as they felt it represented a melding of the arts and sciences, like the school itself. The meaning behind the sculpture holds that during life everyone has many choices to make, which will take him or her through various journeys. In the end, however, one’s choices are inextricably connected with each other.
Choices is cast in bronze, a medium Wilfong often uses, because of its malleability. Wilfong has produced a total of 25 original Choices sculptures; Nevada State College’s is No. 12. Wilfong’s work has been featured in 48 states and six countries the world over. One of the most fascinating features of the sculpture is that it changes in appearance depending on the time of day and season. Because the sculpture is located in the LAS Building’s entranceway, the sunlight strikes the bronze at various angles, creating different shades and depth of tones throughout the day.
The mission behind Wilfong’s artwork is to give people a greater understanding and appreciation for who they are as individuals. Kuniyuki hopes NSC students will have such an experience when encountering Choices. Even if you choose to go in one direction that does not mean that you have to stay on that path for the rest of your life. You always have choices to make, Kuniyuki noted.
As a source of inspiration for students venturing on a myriad of opportunities in life, Choices serves to resonate with NSC’s student body, and bring beauty to all who encounter it.