Thank you! Your submission has been received!
Oops! Something went wrong while submitting the form.
01.12.22 | Campus News | Home Page Feature

Nevada State College officially welcomed our eighth president, Dr. DeRionne Pollard, with an Inauguration event on Wednesday, January 12. To commemorate the occasion, the community – including students, faculty, and community members, in addition to representatives from the Nevada System of Higher Education Board of Regents (NSHE), the City of Henderson, the Henderson Chamber of Commerce, the Nevada State Assembly, and the Nevada State Senate, among others – gathered to recognize and salute Nevada State College’s new leader.

“On behalf of the Henderson City Council, I join in your excitement today as we welcome Dr. Pollard to lead Nevada State College into a new year and a new era,” said City of Henderson Mayor Debra March. “She’s bold, she’s great, and we are so glad she’s State!”

“Dr. Pollard spent the last few months listening to the vast, diverse, great population that makes up our campus community and beyond,” said Nevada State College’s student body president, Lauren Porter. “She makes you feel seen, and she makes you feel heard.”

During the ceremony, President DeRionne Pollard announced a set of guiding principles, or pillars, that help crystallize the work that will need to be done over the coming months.

View the official ceremony and State of the College address. 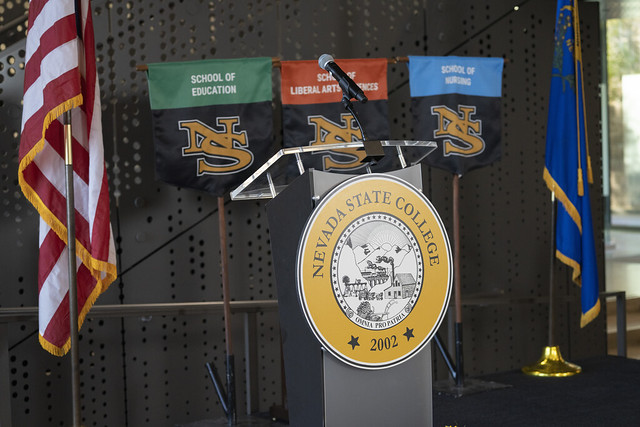