Thank you! Your submission has been received!
Oops! Something went wrong while submitting the form.
03.23.16 | Campus News

The NSC Office of Recruitment and the NSC GEAR UP office hosted back-to-back successful events for prospective students during February.
The Office of Recruitment hosted the 2016 NSC Open House on Thursday, February 18. The event yielded record-breaking numbers for the college.
2016 Open House numbers:
Hosted an estimated 525 guests
Helped 160 prospective students with admissions, scholarships, financial aid, and program information
Awarded 27 on-the-spot Merit Scholarships to future students, for a value of $75,000 (one year)
Awarded 8 Presidential, 8 Scorpion, and 11 Black & Gold scholarships to High School and Transfer students
Served 28 pizzas
“This is the first year we’ve held our Annual Open House on our new campus, and the result has been overwhelmingly positive,” shared Associate Director of Recruitment Taggart Archibald. “This is also the first time we’ve awarded academic merit scholarships on-the-spot for qualified, new freshmen and transfer students, and we’ve already heard from these students that receiving the scholarship in-hand was a big reason they’re choosing Nevada State.”
Archibald expressed his gratitude to all those who contributed to the success of Open House, and especially to the recruiters who stepped up to lead the effort:  Ruby Ortega, Lori Filippo, and Erin Matthews. “Thank you to everyone who helped out, and congratulations to the Office of Recruitment on a job well done!” 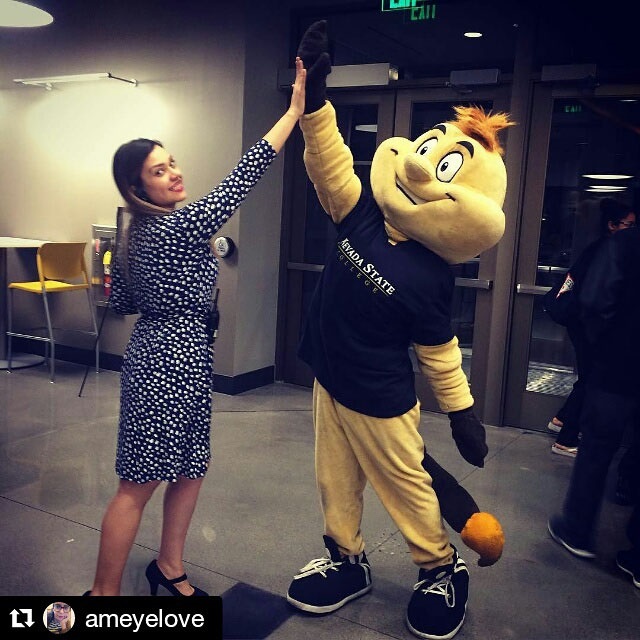 The day after the Open House was the Science of Success STEM Conference, hosted by the NSC GEAR UP office. GEAR UP Ambassador Nick Mathews hosted approximately 100 GEAR UP students from Desert Pines and Las Vegas high schools, as they participated in several STEM experiments and presentations on our campus.
The students had a fantastic time learning about both science and Nevada State College. Stephanie Herzig, GEAR UP SPIF (Student-Parent Involvement Facilitator) from LVHS was able to generate a student write-up about the NSC STEM Conference. Below is the “GEAR UP Chronicle” newsletter story written by GEAR UP student, Brianna Gomez:
“From making Elephant Toothpaste to watching a science professor blow up a balloon full of H2O2, 2016’s STEM Conference was definitely one for the books!
Upon arriving at NSC, GEAR UP Ambassador Nicholas Matthews spiced up every High School student’s non-morning mood with his outgoing and incredibly welcoming personality. He then gave a presentation on S.O.S (Science of Success), giving me the boost of confidence every high student needs to know that they’re fully capable of overcoming any academic struggle that is thrown their way. After the presentation, my peer group moved on to meeting an anatomy professor. I was more focused on the rolling desks than anything else, until he mentioned there were cadavers in the room. I was shocked, but knew there was nothing better than being less than five feet from a real life cadaver! I wasn’t able to see them due to safety reasons, however, he did dissect a sheep’s heart and lungs. The view I had brought out the surgeon interests in me, but the stench made me second guess whether or not i’d be having lunch that day. (YUCK!) The anatomy professor then took us to a room and showed us a preview of a virtual biology class they offer. The 3D glasses and biology combo most definitely brought out my inner nerdiness! I could just go on and on about everything we did, but the best part of it all was how welcomed I felt for my first time stepping onto the NSC campus (and winning a portable bluetooth speaker through a raffle, but that’s a whole other story). Any question I had during any part of this experience, they had an answer with a smile. I can honestly say this conference took my anxiety level down a couple notches and mentally prepared me for college. Just as Nick said, it all starts with the want to better ourselves and the will to do it. With that said, ‘i’m going to college!'”
“To say today’s event was a success would truly be an understatement,” Mathews expressed. “I was overjoyed to see this event grow into such an amazing fun filled day for our GEAR UP students. I’ve never seen students so excited to learn about SCIENCE, TECHNOLOGY ENGINEERING and MATHEMATICS before in my life! To see the students smiling faces as they went from each demonstration to the next, was enough to let me know that we are making a difference!”
Mathews also extended special thanks to the NSC faculty members who presented at the conference. “It was a team effort,” he shared. “I really want to give credit to everyone who helped make the event a success.”