Thank you! Your submission has been received!
Oops! Something went wrong while submitting the form.
06.08.09 | Campus News | School Nursing

NSC Nursing Students Take the Classroom to the Community 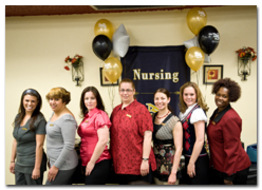 Can you imagine being thousands of miles from the place you called home and having to assimilate into a new culture in three months time? That is the challenge African refugees at the African Refugee Center in Las Vegas are faced with every day. Luckily, those refugees found friends in the Nevada State College School of Nursing.
Nursing students enrolled in the community health course were tasked with helping the refugees learn the basics of survival in a city much different from their native Africa. A portion of the semester was devoted to working to serve the needs of the refugees and devising a strategy for them to achieve independence in their new lives in the United States.
NSC Nursing Lecturer Janine Saulpaugh believes this experience benefits students, as they learn about the impact of cultural diversity on community health.
NSC senior Rachel Penn said this experience requires students to think outside of the box to address all levels of vulnerability people within a community experience on a day-to-day basis.
The nursing students pooled their ideas and, based on their assessments of the refugees needs, they decided to plan a Community Health Fair to provide essential information from basic health to family planning, which is considered taboo in many of their native countries. From start to finish, this event was put together in fewer than five weeks.
Because many of the refugees had no awareness of family planning, this was an area of particular focus at the fair. 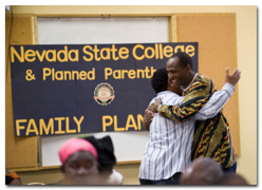 Planned Parenthood Community Educator Laura Deitsch’s expertise was utilized at the fair. Informational sessions were translated into Swahili and educational pamphlets were provided to the refugees in their native languages as well.
Every day presented a new challenge and achievement, Penn said. A lot of small changes led to major progress within the immigrant community.
Nursing student Tymeeka Davis, who is the mother of three daughters, reflected on how difficult it can be for people living in the United States to adjust to a new environment, which gave her all the more appreciation for what the refugees face. Davis found that many of the people they served have lived in refugee camps much of their lives and now live in a land where they do not know the language, let alone how to navigate the city.
Whether it was driving refugees to get basic vaccinations or helping them apply for a Social Security card to obtain employment, the students were up to the task. Their minimum obligation as part of the course was 15 hours per week. However, many of the students put in several more hours on a volunteer basis.
The student’s devotion is inspired at least in part by their professor.
Professor Saulpaugh understands the needs of the refugees; she devotes her entire person to helping others to be able to learn, Penn said. To have a mentor who instills that in you is just incredible.
Saulpaugh believes this community health course is a culmination of what the students have learned, helping them realize they can make small changes in others lives each day.
Davis said this class helped her think more about assessing a patient’s needs from their health to cultural differences and economic concerns. Additionally, the experience has inspired her to find out more about her own African ancestry.

Penn said the experience was eye opening. She came to realize that even as these refugees were physically healthy, they had emotional scars, which ran deep from their experiences in African refugee camps. The course also helped her understand all of the needs of the patients, while enabling her to become a well-rounded nurse.
She is concerned, however, that NSC’s nursing program could be impacted by the potential budget cuts and is worried that courses such as community health nursing would not be able to assist these vulnerable populations with that they need during these tough times. She added, we are their advocates.
Penn will enter the nursing workforce upon her graduation in May, but ultimately wants to be an educator in nursing.
I want to do what the nursing professors at NSC have inspired me to become and be there for students the same way they were there for me, she said.
For more information on Nevada State College, call : 702.990.2000 or visit : nsc.edu.